A Visit with Santa

We often talk about magic in our house. I tell her that we have to believe in magic or the magic will never find us. We talk about her Elf on the Shelf in much the same way. If you don’t believe in the magic of him then it wouldn’t be as much fun. We also talked a little about Santa this year, she is realizing things and asking questions.  I asked what she would do if someone at school told her he wasn’t real. She looked at me so shocked and said she wouldn’t believe them. I told her that she only had to believe what she believed and that they were allowed to believe what they wanted. I told her that lots of people don’t believe in Santa and that that was OK. I told her that I believed in the magic of Christmas and that because I believed in it, the magic always found it’s way into my life. So much is out of our control as parents but these things I can help steer and hopefully help her in creating her own magic someday.

In the above photo she is giving Santa a card she made thanking him and letting him know he was the best Santa and that she loved him. He was amazing, his energy & spirit were contagious.

She walked up and he fell back into his chair  “Anna! Hello! I remember you! Only you had more teeth last year and you were a little bit shorter.”

HER FACE! I can’t even describe it! She was speechless!

He spent at least 10 minutes talking to her…. talking about everything. Elves, her wish list, his reindeer, his magical gloves- it was so perfect! 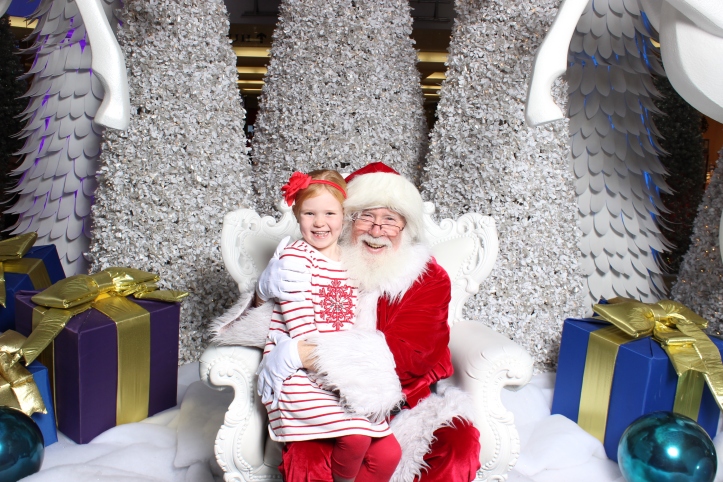 I was literally beaming and for a split second he had me forgetting all about reality. I felt the magic of the whole experience and I walked away with the happiest of hearts.

My Baby Joy card collection kit is available @treasuredmemoriesedmonton , in store & online. These cards were designed with Baby Joy from @p13paperproducts ,kits come complete with all the product, photos & instructions to create these 8 cards. #cardmaking #cardmakersofinstagram #cardmaker #p13paperproducts #babycards
Kit Subscribers: your newest kit is ready for you @treasuredmemoriesedmonton . Please let the store know (780-414-1540) if you are going to pass so they can put the kits out. I unfortunately have no extra kits, all were spoken for. Thank you so much ladies!!!
My baby card collection will be at the store early next week. (I know I said this week but...life). Each kit comes complete with all the product, instructions & photos to make these 8 cards. As previously mentioned, I won’t be pulling for subscribers, please let me know if you would like a kit. Thank you to everyone who has asked for one already. 💞
Working on a card collection that has me dreaming of a vacation.
My family knows the way to my heart. 💖
I took a break from baby cards to make a bunch of sweet Valentine’s. Have I mentioned that I love love?